At this point in my life a few tapas are the perfect meal. I don't need to bulk up with a lot of carbs - far from it. A small plate of food followed by another and, if you're still not full, then order a couple more. Nobody seems to care how long you linger except perhaps the people standing behind you waiting for a place at the counter.

And as we tapas-ed our way across Spain I learned a lot. Tapas originated as a little snack "on the house" to be served with your caña - short beer - or fino - local dry-ish sherry. The empasis was on salt to keep you ordering drinks.

So here, from left to right are three traditional tapas. Olives - which you never pay for. Boquerones - vinegar cured anchovies. And air dried ham. I had no idea jamon played such a huge role in Spanish food. But more on that in another post.

Then it seems over time tapas became more complex and were now small portions of food you might eat in a Spanish home.

From left to right - fried eggplant drizzled with a sauce that is called honey but isn't. It's cane syrup which sounds odd but works. Then croquetas - fried goodies made from fish, chicken or pork using a thick white bechamel sauce to hold it all together. I never met a croqueta I didn't like. So very popular you can also buy them pre-made at the butcher shop to take home and fry up yourself. Next, tortilla, which in Spain is not the flat corn Mexican type but instead is a kind of thick omelette made with eggs and lots of potatoes. The Spanish are wild for it but to my taste it is stolid and dreary. And, finally, this surprise, ensalada russa, Russian salad, which you probably know is potatoes, peas, carrots, etc. all bound together with mayonnaise. I had no idea how often mayonnaise shows up in Spanish food. In Italy we have ensalada russa - but only at Christmas - and mayo is rarely used in anything else. But it was hard to get a shot of ensalada russa because every time we got to the bar it had mostly been scarfed up.

As we moved to larger cities the tapas definitely got more "fusion". 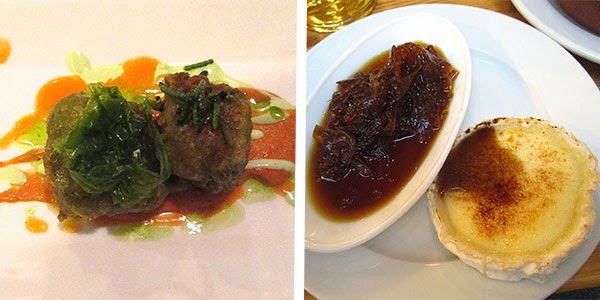 For instance, I just don't think that tuna tartare - on the left - has been a regular selection until recently. The entry on the right is baked camembert with caramelized onions. Excellent, but I'm pretty sure the "campesinos" aren't snacking on this with their glasses of fino.

By the time we got to Barcelona it had become clear that tapas for many had evolved into the evening meal. One night in an upscale tapas place I saw two local guys come in and order a very nice bottle of rioja, several tapas and then strawberry shortcake.

Lunch is still the main meal of the day in Spain and the daily special - menu del dia - is a very good deal for a hell of a lot of food. But our favorite meal in Andalusia was to go to the Malaga market which is housed in a beautiful cast iron building incorporating an old Moorish stone arch. At the tapas bar near the fish section we had some of our most fun meals - if you don't mind standing up the whole time.

This clam - conchas finas - translates from Spanish as "fine clam". Which is true. This is the best clam on the half shell I have ever eaten and we ordered it every time. Next are cod roes sauteed with garlic and parsley. The Spanish eat fresh roe everywhere and it reminded me of one of my American favorites - shad roe. These snails are called "canaillas". From this shellfish the Phoenicians extracted their famous purple dye and it only lives in the seas where the Mediterranean and the Atlantic meet. After they've been cooked in boiling water, you eat them cold with a squeeze of lemon.

And, to finish, here are a few more shots of tapas that are pretty traditional but nothing I had ever tasted before. Air dried tuna. Kind of like the air dried beef "bresaola" but fishy. Calçots, which could be grilled spring onions or grilled garlic scapes or, what I think was in this case, grilled baby leeks served with a garlic mayonnaise flavored with paprika. And this dish which I had in Cordoba. It's a garlic/almond puree topped with Malaga raisins soaked in Malaga wine, slices of green apple and toasted almonds plus a drizzle of olive oil. Sounds totally over the top and "nueva cocina espagnole" but it's actually a very traditional dish formerly made with a mortar and pestle.

And the amazing thing about all this delicious food is its price point. The two of us never paid much more than twenty euros a couple including beers even in big cities. In fact, in Grenada, we went to a tapas place where each time we ordered a beer they bought an enormous plate of food to accompany it for free. We figured it was probably stuff which wouldn't be as good the next day. Towards the end of the evening we asked for another beer but with the caveat - please, no more food. We were tapas-ed out.
Posted by JoJo at 5:18 AM No comments:

Paella for a Crowd

What's the dish you think of when you hear the phrase "Spanish food"?  Paella, right?

And it truly is the national dish as we learned our first Sunday here when we went to a village fiesta in the nearby town of Comares celebrating their patron saint's day.  There were to be bands and singing and a procession through the streets but most of all there would be the making and serving of a gigantic paella distributed to one and all - and for free! 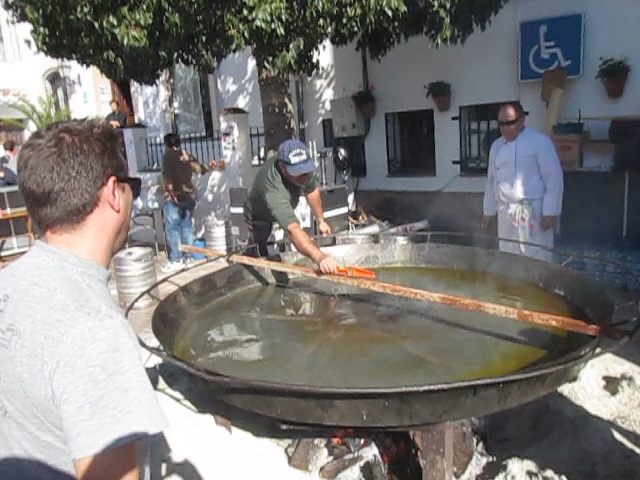 Our timing was perfect as we arrived in the main plaza just as the paella making was beginning.  A huge log fire had been lit surrounded by a rim of sand - to protect the cooks' legs from singeing.  A great deal of time was taken to make sure that the pan was lying flat on its frame .  Spirit levels were produced and measurements made and the pan was adjusted several times until it seemed that the relationship of flame to food would be in equal proportion on all sides.


The cooking team in charge was a group of half a dozen men led by a chef (in whites) who told us that they'd been doing this for fourteen years now and when not making enormous paellas were all professors. 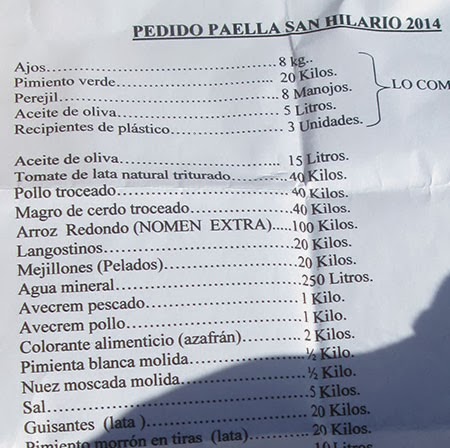 Here's a partial grocery list the chef showed us of the ingredients they'd brought with them to make the paella.  I think 1 kilo each of Avrocrem Pescado & Pollo is probably powdered fish and chicken bouillon cubes which seem to have become a ubiquitous global addition to just about everything. 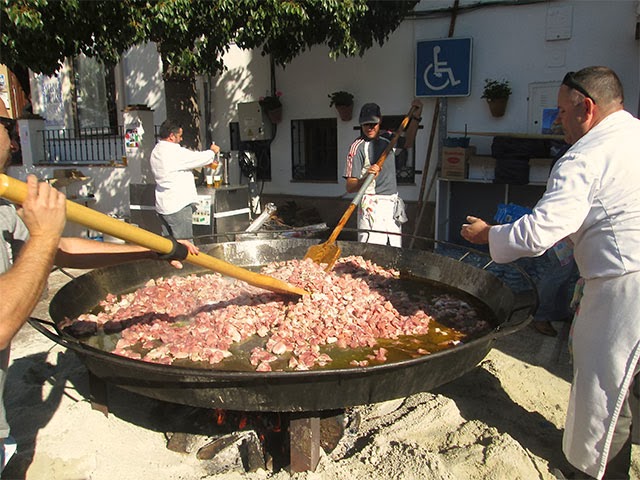 
Phase Three - add the seafood - 20 kilos of large shrimp and 20 kilos shelled mussels.  Followed by cans of tomato sauce, red peppers and peas.  Then saffron - which I'm pretty sure was not saffron but something to turn the whole thing an appropriate yellow - maybe turmeric.  Plus salt, pepper and ground nutmeg.  All during the process the guys turning the whole thing over with their gigantic paddles would taste the liquid and consult one another as to whether it needed more of this or that.  It was a serious gastronomical operation. 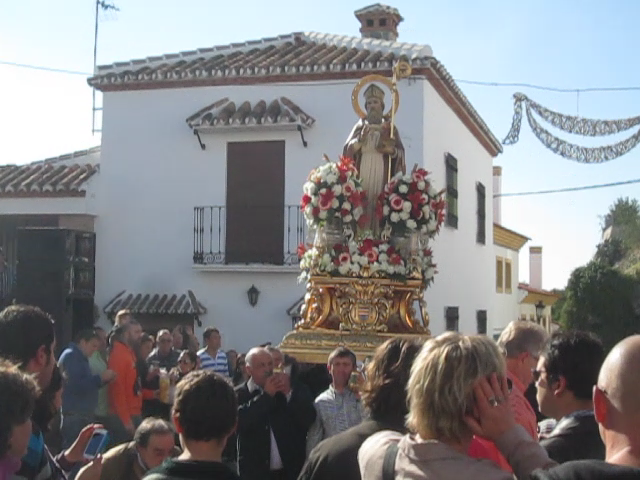 At this point Comares patron saint, St. Illario or Hilary of Poitiers, arrived being shouldered by six strong men on a plinth.  St. Hilary lived in the mid 4th century and has been named a Doctor of the Church for his strong stand against the Arian schism of early Christianity.  Since living in Istanbul which was the center of this bitter, deadly disagreement, I have spent a great deal of time trying to figure out what the hell this doctrinal dispute was about over which many people murdered each other but it still eludes me.  All to say, that St. Illario seems a strange choice for a very small village in the middle of Andalucía to have adopted as their mascot.  Maybe it's because he's also supposed to provide protection from snake bites.

A great deal of music and dancing with guitars and lutes and girls with castanets and ribbons in their hair accompanied the parade.  But I knew if I got a closer look at that I would lose my front row seat at the paella pan so I suppose I'll have to catch up with that part of the festivities at another village's bash.

Now 250 litres of water were added to the pan, brought to a boil and then in went the rice to great applause.  This seemed to be a signal that drinks and hors d'oeuvres were to be handed out and it rapidly became total pandemonium.  Beer, wine and soft drinks were passed over our heads to the crowd as were bowls of cracked green garlic flavored olives.  Then pre-sliced chorizo and morcilla sausage plates arrived as well as slices of manchego cheese and were scarfed up by people who acted as though they hadn't eaten in days.  Meanwhile the trusty paella team soldiered on using their paddles to lift and stir the rice.

Finally, after more than two very hot hours work, all 1,600 plates were ready to be served with a wedge of lemon and a slice of bread.  Here's our portions. 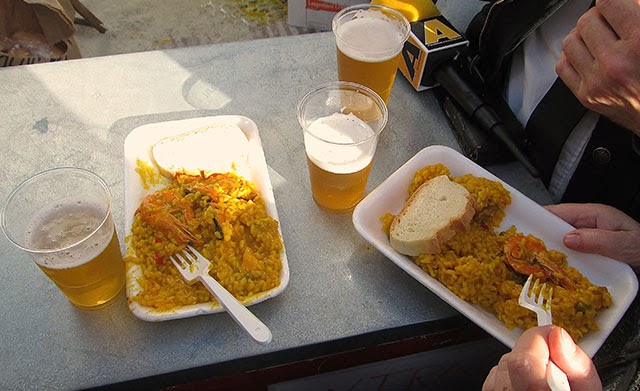 And here's a short film by Bruce documenting the whole process.